If summer movies are gonna be all superheroes and giant robots, then I’m gonna sleep until Labor Day.

But seriously, the summer movie season officially kicks in with two much-hyped 3-D releases: “Iron Man 3,” with Robert Downey, Jr. again cracking wise and creatively defeating villains, and, next week, something that might appeal to adults — the apparently gaudy, Baz Luhrmann-directed adaptation of Fitzgerald’s “The Great Gatsby.” So it’s nice to see some “small” films, including the likes of “Mud” and “The Sapphires” (below) sneaking their way onto local screens from time to time, even during the Season of Scorch.

(For a smart preview of the movies’ silly season, check out Bill Gibron’s piece at PopMatters)

“Iron Man 3,” in which our hero (Robert Downey Jr.) defeats half-human, half-robot baddies apparently under the leadership of a sort-of Middle Eastern radical Islamic fundamentalist type called the Mandarin (Ben Kingsley); the related crimes, including bomb blasts in public places, are particularly unsettling in the wake of the Boston terrorist attack. Pepper Potts (Gwyneth Paltrow) does some butt kicking this time. No spoilers here, but one scene reminded me a little of the flying Elvises (Elvi?) in “Honeymoon in Vegas.” Just saying. The watchable cast also includes Don Cheadle, Guy Pearce, Jon Favreau, Miguel Ferrer and a woefully under-used Rebecca Hall (“Barcelona”). 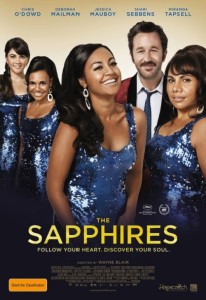 Also opening: All the other studios apparently were too skeered to open any major movies against “IM3.” Wimps. Locally, though, Tampa Theatre is showing “The Sapphires.” The film, based on a true story, follows the rise of a quartet of Australian Aboriginal female singers determined to launch their career with performances for U.S. troops in Vietnam. Chris O’Dowd co-stars as the Irish musician and R&B devotee who helps manage the group.

The music-packed film will have the benefit of being presented on Tampa Theatre’s newly installed $150k digital picture and audio system, which made its debut at the Art Deco movie house Tuesday night with a screening of “Samsara.” More info here